The Southern Intercollegiate Athletic Conference, or The SIAC, kicked off there tournament March 3 and also celebrated 100 years of existence. Reec of Hot 107.9 Not only received the honor of providing the halftime fan interaction, and entertainment for the ornament, but also connected the city of Birmingham to the festivities by chaperoning several teams, coaches and cheer squads to Boys & Girls clubs and schools that surrounded “The Bill Harris Crossplex Arena” that housed this years SIAC basketball tournament.

When the smoke cleared Saturday night The Tuskegee Golden Tigers defeated the Fort Valley StateWildcats 88-80 in overtime to win the 2014 SIAC Men’s Basketball Tournament Championship, with Richard Dixon of the Tuskegee Tigers taking home the Most Outstanding Player honors. 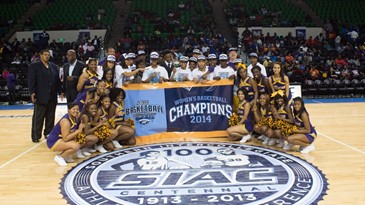