Reec kicks of 2020 with a must listen Monet Monday! This real estate power couple are crushing the competition by helping people acquire their dream homes, taking care of the first two months of living and even helping with moving cost! Tune in and hear this ground breaking approach to real estate!

Boxing Is Back in Atlanta and The Fans are Ready For It!

It has been over 20 years since then champion Evander “Real Deal” Holyfield laced up his gloves to bring championship caliber boxing to Atlanta. During this sporting sabbatical, The South in general seemed like an after thought when it comes to championship matches. Especially with marquee cities like Las Vegas, New York and Los Angeles holding on to the reigns tightly, providing high energy events with big named opponents clashing in the ring as the proverbial titans that they are.  Yet three men have ripped through their weight classes and have physically embodied the words the Andre 3000 (Outkast) spoke so passionately once upon a time “the South Got Something To Say”.  Enter Deontay Wilder, Errol Spence Jr. and Gervonta “Tank” Davis. Three different camps, three different fighting styles and three different electrifying fighters putting a fuse in southern fight fans, that hasn’t been lit in years!

Errol Spence Jr. sold out Jerry’s world earlier this year in his hometown of Dallas Texas. His ring demeanor and swagger has put him on the map and paved the way for his fast tract to multiple belts.

The Heavy weight champion of the world has a new definition when it comes to the fierce intensity the the “Bronze Bomber” brings with every swing! Wilder stands at 6’7″ with a cut frame that usually middle of lighter weight fighters carry. But don’t let Deontay Wilder’s lack of girth fool you,  he packs a punch that drops his opponents on a very regular occurrence. This is why they dub his team and fan base “The Bomb Squad”! He has a title contention coming in 2020 that is heavily anticipated! (Click here for Wilder info)

Heavyweight World Champion @BronzeBomber made a HUGE statement last Saturday night 👊🏾 💣 💥 ❗ Wilder talks about the devastating KO of “King Kong,” his upcoming rematch with #TysonFury and much, much more this week on #ThePBCPodcast. #BombZquad 🎧 : http://premierboxingchampions.com/podcast

Then there’s a seemingly quiet kid out of Baltimore Maryland who is promoted by one of the most braggadocios and exciting camps that boxing has seen in years, The Money Team. Gervonta “Tank” Davis may not give you the “quotables” that some of his counterparts does, but one things for certain, he will give you all the work in the world and all the excitement you can handle in the ring! He is a hit on social media, the ladies love him and the young boxing fans idolize him. In the words of Leonard Ellerbe, Tank is the future of boxing, and the future looks bright”.

Come Saturday Gervanta puts championship boxing in Atlanta, back on the map!

This week Premier Boxing is making sure Christmas comes twice to Atlanta. The city will be treated to a major title fight as fan favorite and rising star, Gervonta “Tank” Davis attempts to make personal history in an effort to grab the vacant WBA World Lightweight Championship belt.

Atlanta boxing fans are emitting an unfathomable feeling of admiration and celebration for “Tank”. During my radio show if his name is even mentioned, the phone lines would light up like the north star with people hoping to win tickets or get more information on his upcoming match 12/28 at State Farm Arena.

The feeling of pure excitement for this match and fandom for the fighter was so thick in the air during last nights open to the public media workout, that it could almost be tasted as soon as you entered the parking lot of Atlanta Sports Complex. The gym was packed almost an hour before the event was scheduled with fans and families eager to get a glimpse of the champion and his stable mates of Upton Boxing Center. They all looked forward to being woven into one of the most anticipated sporting events the city will experience this year. Even the young kids looked onward with a twinkle in their eyes as Gervanta made his way through the crowd minutes before the event kicked off. From the first bell of the workout, in Upton Boxing Center fashion, the energy, power and flare where absolutely present!

First Mia “Killer Be Ellis took the square roped stage with her father and long time trainer Kenny Ellis to display and poise that only she could provide.

Next, opening acts including Kareem Martin and Malik Warren graced the area with power and ability.

Two locally bred boxers where present and one will be making his big stage debut on Saturday night. During a side interview he told me it means so much to him to be representing inside of his city and for all of the kids that come from his walk of life, to see what he is doing.

The build up did not disappoint, as long time friend and stablemate  Malik “IceMan” Hawkins took the ring. The Coach Calvin & Trainer Kenny seemed to know something about this kid that his previous opponents that have helped make his 17 – 0 professional record know as well…. He’s the real deal!

Enter the “it Factor”

Champions come in all shapes, sizes, backgrounds and charisma. The Champion of the evening came with everything you look for in a boxing star, and he came with his daughter. As he climbed into the ring with his toddler it was immediately prevalent as to why the fans love this guy so much, He’s the “peoples champ”. Minutes into his workout, the other reason became increasingly obvious as to what Leonard Ellerbe, Floyd Mayweather and the entire Money Team are willing to bet the house on Gervonata. It’s because his bite is absolutely louder than his bark. His record of 22 wins, zero Losses with 21 knockouts also tells you one thing, watch out for the left hand.

With a limited amount of tickets available and people scrambling to scrape up the last few available, I would advise you to get this fight on PPV, get you r popcorn, and come Saturday be ready for some great boxing!

For the Third consecutive year our very own Reec (@ReecSwiney) & K-Camp (@kcamp) treated the city to a free celeb basketball game. It was a PACKED HOUSE. shout-out to everyone who was a part of this event.

Over a thousand people were in attendance and everyone got in for free courtesy of Positive American Youth, The Campsgiving Foundation and Riverside Epicenter. It was a day filled with celebrity basketball action, performances by Xtreme Cheer Gym and The South Cobb Jr. Eagles Cheer Squads.

Another Turkey Give Away in the books! Special thanks to everyone that came out and EVERYONE THAT CAME TOGETHER to make this happen. Special thanks to Reec Swiney (Hot 107.9) & Erica Thomas (GA State Representative) & Urban One Atlanta as our media sponsor. Also to Cobb EMC & Amerigroup. A lot of people left with turkey’s and “fixens” for their thanksgiving feast. 🙏🏽. #ThePowerOfGiving #Community #WhoYouWit 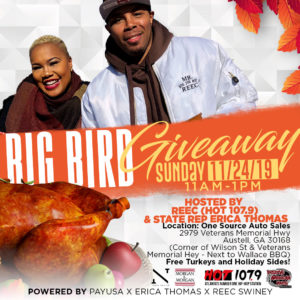 3×3 Basketball has exploded within the USA basketball scene with US Basket & FIBA having a multitude of qualifying tournaments. These tournaments give any hoops trio the possibility of representing the USA in the 2020 Olympics as the Men’s or Women’s 3×3 Team. This weekend Redbull teamed up with US Basket for a unique take on the qualifier in Raleigh, NC. This version was a culmination of 3x basketball, entertainment and of course, complimentary Redbull. Midday Personality of ATL’s Hot 107.9, Reec Swiney, provided a very unique take on color commentary for the women’s and men’s games. DJ Nevy of NC coordinated the music for the day. After a very competitive day of hoops the Women’s Division named The GW Bulldogs winner. This was there 6th tournament this year and 4th final championship. The Men’s division saw Atlanta’s own 3x traveling team “Shooters Gone Shoot” take on a local NC 3x powerhouse “Nomad Hoops” in an extremely intense championship battle. In the end the “trophy” stayed home in NC fo this tournament as Nomad hoops prevailed. 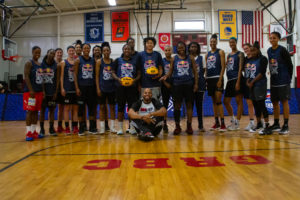 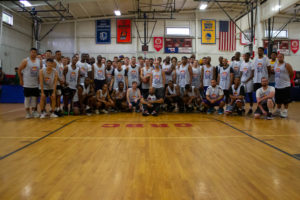 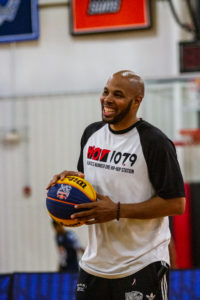 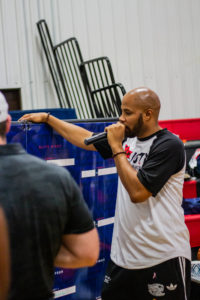 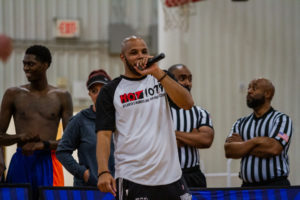 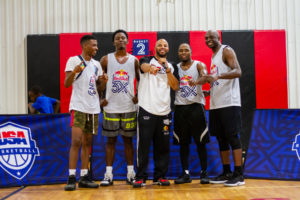 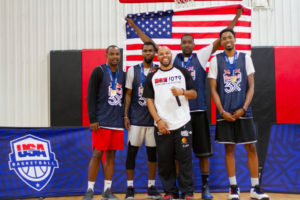 With back to school right around the corner it was a pleasant surprise for parents with children to receive free hair cuts and school supplies when they arrived to discuss many topics in an open forum with local law enforcement dubbed Clippers & Cops.

Many topics of discussion took place in addition to the back to school festivities. Concerns of gang related policing, how to handle teen offenders, and knowing your rights during a traffic stop. Tensions did run HOT a few times, between some local activist and the officers but moderator Reec (Hot 107.9 / PAYUSA) got things back into perspective. In the end both parties were able to hear what the other was bringing to the table and a level empathy was reached.

A favorite part of the event for the attendees was the “Traffic Stop” demonstration, in which officers mocked a traffic stop and pulled over Reec, giving out different situations and showing how they are thinking and executing. This gave the onlookers a better perspective of what to do when being “pulled over”.

Another Successful Block Party & Free BBQ in The Books!

Sunday 6/30, PAYUSA & Reec (Hot 107.9) kicked off our Free BBQ and Block Party Series named “Reec Treats The City”. The community came out for this event in droves! We served north of a thousand plates, Reec & PAYUSA Gave away a truck full of toys and house hood items and the kids had a blast on the game truck and moon bounce. 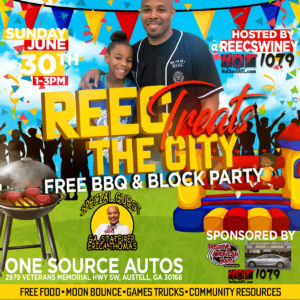